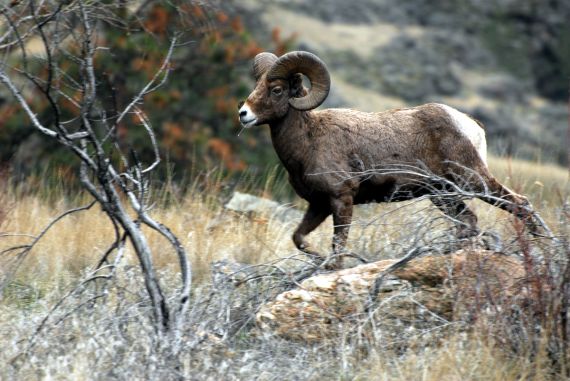 The Next Count will be held Sunday February 9th, 2020
We assemble at Vaseaux Lake Provincial campsite at 8:00 a.m

Transportation up the hill to the count locations will be provided.
The fire is lit , the Coffee and Doughnuts are on us!
Following the count and check in, a steak lunch is served in the club house at 352 Sportsmen's Bowl Rd in Oliver.

If you are not a hiker or can't hike, you were still welcome to come and have lunch with us. Our Amazing Steak Dinner has a cost of $25.00.

2020 will feature special raffle items that may include firearms!

We had approximately 25 Volunteers/Hikers attend with an 8am Start at the Vaseaux Lake Campground. We'd like to thank our visitors who came from the Lower Mainland to be apart of history and locals who braved the frigid temperatures in the name of conservation.

We'd like to thank this years volunteers who organized and cooked for the event: Lee Clarke, Joan Lindsay, Mathew Lewis, Darby Lewis, Ron and Mary Ostermeier and Lindon Springer.

This is the 70th Annual Sheep Count at Vaseaux Lake-- the longest consecutive wildlife and sheep inventory count in Western Canada.

62 persons participated in the hiking and counting of the sheep. The participants came from the communities and areas of Kamloops, Vernon, Kelowna, West Kelowna, Westbank, Summerland, Penticton, Okanagan Falls, Oliver, Abbotsford and Nelson.

The group consisted of men, women and a young girl of approximately 9 years of age who showed a lot of the participants what energy looked like.The count consisted of 88 Sheep (38 Rams, 42 Ewes, 8 Lambs) and 85 Deer (70 Mule Does, 3 Whitetail Does, 12 Mule Fawns). The weather was overcast with a low ceiling and misty. The counters were hampered by the weather and visibility was restricted. 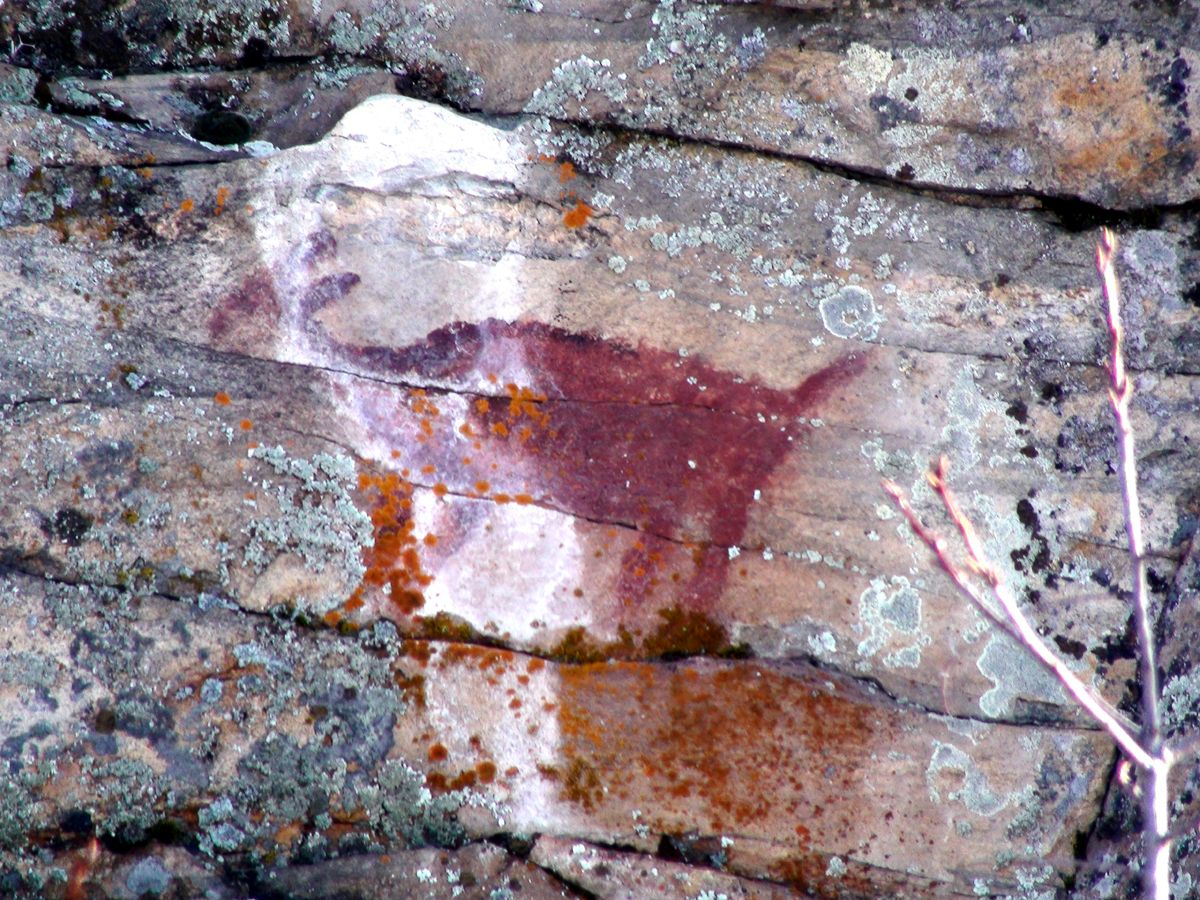 South Okanagan Sportsman Association
Aboriginal Rock Drawings
February 15, 2011
The following report is tabled by Ken Gardner, member and director of the OCEOLA Fish and Game
Club of Winfield, BC. Marilyn and Ken Gardner joined the SOSA members to do the annual sheep count
in the Vasseaux Lake Area. This is the 62nd year that the sheep count has taken place.

Club members meeting at the Vaseaux Lake Park
We gathered at the Vaseaux Lake Park at 8:30, Feb 13, 2011, to sign in, have some Tim Horton’s and
meet all the members from SOSA Club, Kelowna Club and Winfield Club. There were about 30 SOSA
members, 5 Kelowna members and the two of us from Winfield.
Everyone split up into groups for different count areas. The group that we were with took on the Castle
Mountain Hike, which we thought was one of the easier hikes, but it turned out to be the longest hike.
We hiked approx 4.5 Km and it took 5 ½ hours.
The following Google Map show the approximate hike route that we took : 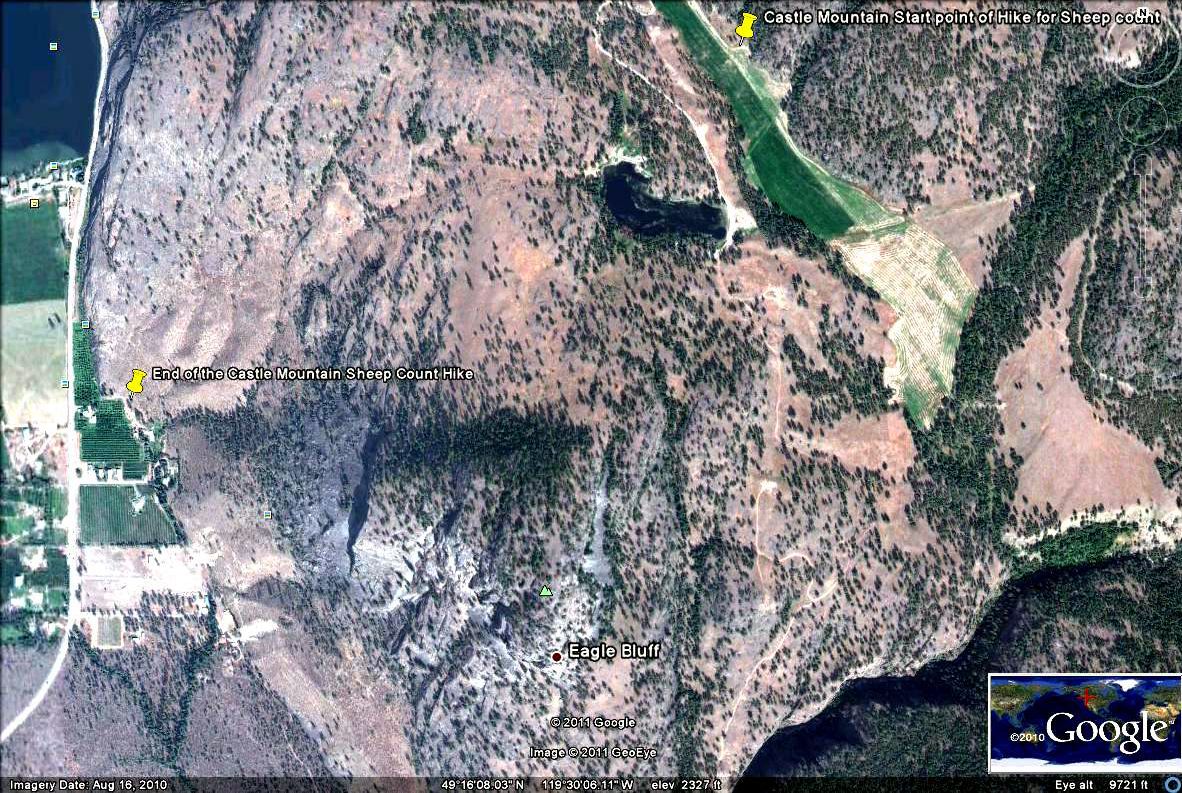 This is the approximate hike route that the Castle Mountain Sheep Count takes
We stopped at the Rancher’s house to get his Ok to go onto his property at the start point in the hike.
Once the hike crossed the field and fence, we were on Crown Land.
As you can see from the start of the report of the Aboriginal Rock Drawing and the following pictures,
there was a real adventure at the very start of the hike. 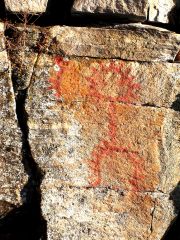 This was very interesting and it was surprising how clear the last rock drawing was of the sheep, of which
we did not see one sheep in the whole hike. We did see one Doe Mule Deer and lots of sheep signs and a
lot of other wildlife signs.


First stop to search for sheep about 1.8 km into the hike (right)

The weather as you can see was great and the snow not too deep. Once it started to melt, the climbing up and down the valleys and over rocks got slick. There were 8 of us in the party. Our hike leader had been on the sheep count for 15 years. He knew the area and the history of the trail very well and it was a real joy to hike with him.

There were some sheep sign and lot of deer sign on this side of the mountain. There were coyote tracks every where, which is a real problem in that area and most every area. They take a lot of the lambs in the spring birth.

About the 3rd Km into the hike.


This was one of the larger and deeper valleys that we had to hike down and back up the other side. From the other side, we would be at the base of Castle Mountain to start the last leg of the hike.

About the 4th Km into the hike at the base of Castle Mtn and the Lake in the back groundWe expected to see sheep in this area, for this is normally where they feed during the winter months. We did not see any sheep, although there was sheep sign. A lot more deer sign than sheep though. 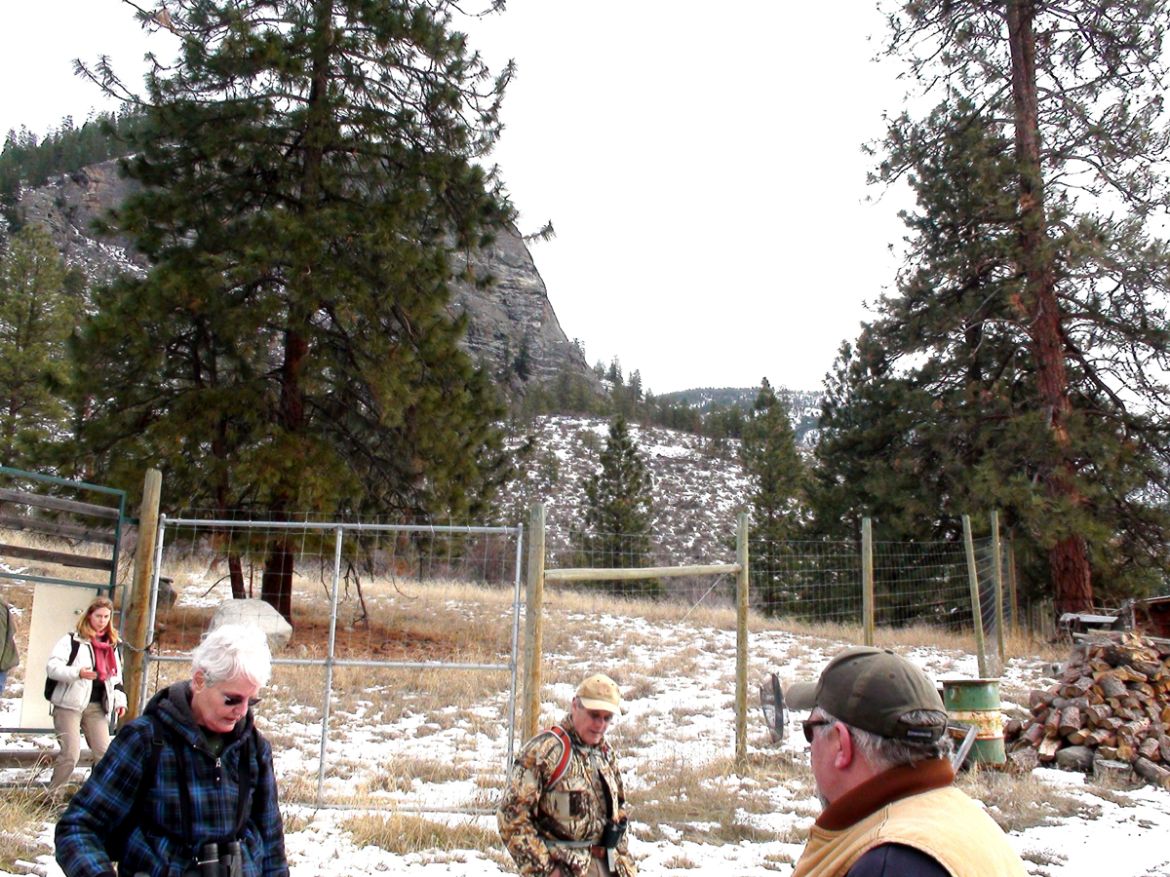 The end of the 5 km Hike with Castle Mountain in Back Ground and the Valley we crossed It was a great hike and we plan on doing the Sheep Count next year. After we were picked up at the highway and taken back to the Vaseaux Camp Grounds for our vehicles, we then when to the SOSA Club House for a $10 Steak Dinner and a good visit. We also got the sheep count details.

After the meal, Biologist Brian Harris of the Penticton MOE Ministry Staff, whom had been part of the
hiking group and the sheep count provided a lot of information on the sheep. He covered a number of
areas and mentioned that the Ministry had done a sheep count in the spring and there were 400 sheep
counted, which was a huge gain from the 1999 die off of the sheep population.

Concerns about a domestic sheep mange effecting the health of the wild sheep:

A couple weeks ago, a group of hikers had taken pictures of a Ram on the north side of Ollala area, that
did not act sick, but had no hair on its body. The ministry staff went into the sheep herd and captured the
Ram. It had little to no hair on its body and both ears were packed full of some kind of hard matter. They
have taken samples and are waiting for the lab results. They are afraid that it may be at type of domestic
sheep disease, which the wild sheep are not immune to. So far, only the one Ram in a head of 18 sheep
have been spotted to have this problem, but there were two others showing faint signs of the same thing.
They are asking for all hikers to keep watch on the sheep in all areas and notify them if they see
any sheep with strange looking ears or loss of hair.

Other information and comments:

Brian mentioned that the last year was a very good year for the sheep lambing and there was a good lamb survival rate.

Brian mentioned that they can not believe the huge growth of the Okanagan Park Elk head. They are going to continue to have the 6 point hunting requirement although a number of the club members requested that possibly a special draw could be done for 5 point elk harvest. Brian felt that it would not be possible, but suggested that they would review it.

Brian mentioned that for the last two years, the Ministry in Region 8 area had tried to organize a hunting license for a hunter’s wolf hunt as a method of wolf management. He said so far, the Victoria has put an end to implementing a season in Region 8.

He suggested that the clubs should do a letter writing and email campaign to the ministry to push this further along.

That concludes my report of the sheep hunt and of the Club meeting after the sheep hunt. A great bunch of people and we enjoyed the whole day.

On Behalf of the Southern Okanagan Sportsmen's Association (SOSA)
Oliver, BC www.okanagansportsmen.com